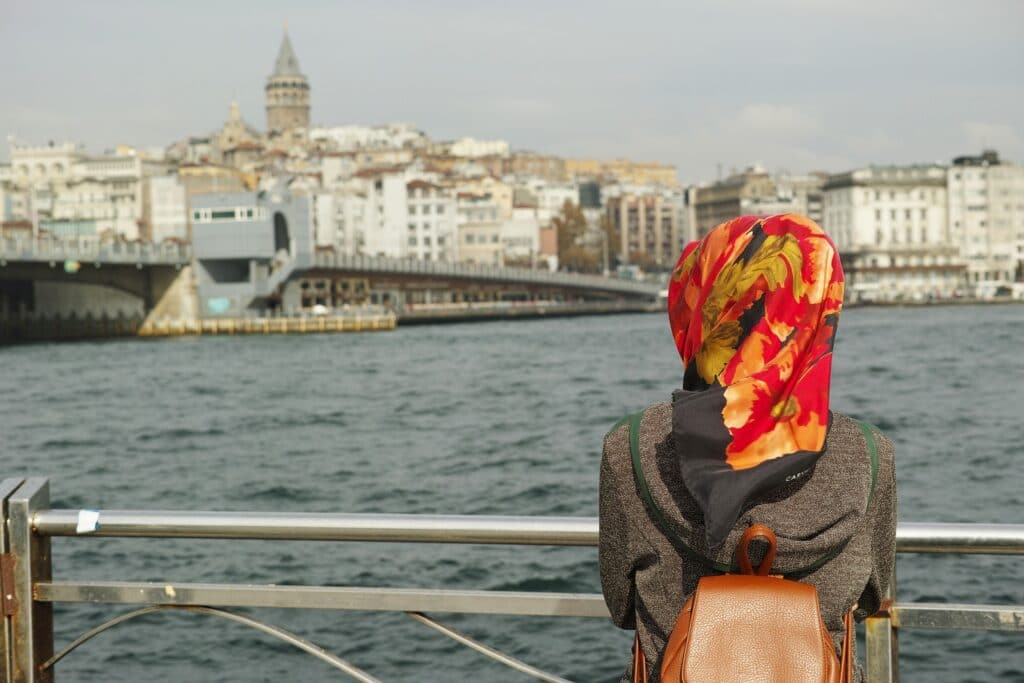 In recent years, migration has become one of the most discussed phenomena, both within and outside the academic world. This book takes into account how Syrian female refugees are socially, economically, culturally, ethnically and sexually marginalized. Author Onur Yamaner analyzes how discourses produced in the Turkish host society affect Syrian female refugees and local women. What do these women think about the ongoing events, their status and the steps the Syrian government and NGOs as well have taken so far in order to produce solutions for women’s invisibilization in the public sphere?

In this chapter, firstly, data collected from Facebook is examined under three main titles. While working on the data, examples are given regarding social media use and the impact of social media on social events. Secondly, the relationship between the data collected on social media and the five basic codes present for the entire study are examined. Thirdly, the responses of the locals on social media regarding the preferred governmental discourses of “guest”, “Ensar-Muhacir”, and “Muslim brother” are scrutinized. Next, it is important to inspect how aspects of the discourses against Syrian refugees on Facebook lead to Syrian female refugees embodying them. Finally, I will focus on the representation of Syrian female refugees in Turkish mainstream media.

Facebook and mainstream media play vital roles in the dissemination and reproduction of the majorly discriminatory discourses against Syrian female refugees in Turkey. For understanding how these online discourses affect the lives of these refugees, it was important to examine Facebook comments and likes. I initially set the framework of the codes collected under three groups: general discourses, discourses on Syrian refugee women, and discourses depending on the agenda. These three groups are formed in order to categorize the Facebook posts and comments aimed primarily at excluding Syrian refugees. They also serve to analyse how, when, and with what motivation these posts were created. Within these categorized groups, there are also subtopics listed below.

Discourses Depending on the Agenda

With all this gathered information, the connection between these discourses is analysed. After discussing social media, the discriminatory discourses related to the refugee issue in Turkish mainstream and print media is looked at.

In the last few years, there has been a massive increase in the number of social media users. Facebook has reached over 2.2 billion active users, and Turkey is in ninth place on the list of “Leading countries based on the number of Facebook users as of January 2018” (Statista 2018). Using Facebook as a new form of public sphere has affirmative and negative effects. However, this book focuses on what role social media plays in disseminating hate speech against Syrian refugees.

Compared to mainstream media, social media platforms like Facebook and Twitter can distribute news to a large number of people fast and relatively free (Broersma and Graham 2013), and utilizing Facebook as the main source of news dominates social media usage in Turkey (Fletcher and Radcliffe 2015). Recently, Facebook and the other social networks have become Turkey’s new form of online libraries for information. Through social media, people can follow trends, get information on current news, and share their thoughts at any moment and without any charges. The speed of adjustment to Facebook in the local society gives some feedback about the society’s characteristics, and aids in understanding the basic set of tendencies in the society. While Turkish people spend only one minute per day reading books (Hızlan 2017), watching TV (at six hours per day) is 94.6 % of Turkish people’s most popular social activity (Gürbüz 2015). The average length of time spent on social media in Turkey is 3 hours and 1 minute per day (We are social 2017). By spending so much time on social media, people narrow their understanding of issues. This leads to increasing difficulty in interpreting surroundings and events due the narrow scope of their reading exposure. For many people, the only reading they do is on social media. These posts on social media are often short and limited, reducing user’s abilities to analyse causal relationships or to maintain objectivity. This tunnel vision of information leads to a high level of propaganda dissemination, the formation of urban legends and misinformation on social media (Şencen and Kalkan, 2019). This can serve as another tool to analyse how these discourses towards Syrian refugees are spread on Facebook, as well as how the reproduced Facebook posts containing sensationalism, misinformation and polarisation are interpreted by those who spend only one minute per day reading offline. When lack of knowledge, lack of interpretation, and lack of questioning are combined with a desire for instant gratification, Facebook posts are sometimes considered trustworthy, although this is primarily dependent on who has shared the post. In other words, those who remain in between news A and news B are more enticed to take sides according to partisan polarization (Ibid).

Today, a critical issue in Turkey is that the mainstream media is almost all under the control of the government and, as a result, has given rise to an extreme polarization of the press. Due to this, social media became an alternative type of platform where everyone could broadcast their own news. The most important example of this phenomenon is the functional use of social media in the Gezi Park protests. The collective movement of these activists (later conceptualized as “Gezi Park Youth”) against the power was viewed as a civil democracy action that was “above class, above generations, above gender, above superiority, above emotions, above parties, above attitudes, and above teams” (Özkök 2013). In the Gezi Park protests, the impact of social media on participants was massive. In the massification of discourses in Ankara, the characteristics of social media (such as the possibility of one person to address many), the distribution and sharing of information in a controlled way, delivery to everyone at the same time through a closed network, the formation of discussion platforms where everyone can actively participate, being an interactive communication tool, and having an organizing quality are vitally important to investigate (Topbaş and Işık 2014). To spark people’s emotions through social media or to grow the movement, it is necessary to disturb others by the perceived phenomenon, occurrence, or situation. Otherwise, the impact of the shared posts would remain confined to small circles. As was in the Gezi Park protests, social media that activates the masses and removes notions of boundary, space, and time (normal barriers to communication) can become a threatening medium open to information pollution and manipulations (Ibid). In both cases, it is related to perception management and is reshaped according to the circumstances. The Gezi Park protestors ignored by the government (and targeted and alienated by mainstream media), and refugees alienated by society, are different in their positions on social media. These two situations seem to have paradoxes in them and seem to invalidate the claim that social media is an alternative platform against the government and the mainstream media controlled by the government. Even though these particular social media users’ usage patterns and reactions vary, there is parallelism in terms of the perception formation their interests or disturbances, and in terms of bringing the majority together by a common denominator.

One other point worth mentioning is how Facebook influences society and social life by giving perceptual power, which allows people to position themselves as experts. However, the problematization of the Syrian refugee issue is complicated by focusing only on negative assumptions through social media channels. These assumptions, indeed, indicate how the social codes behind peoples’ actions shape their discourses. It would be better, however, to approach these issues from a historical background in modern Turkish social psychology. In this context, our main reference would be the process of Turkish westernization (modernization), the effects of Turkish westernization on Turkish society, and the Turkish response that this radical change in society forms the background of the current conflicts (Zurcher 2004). The history of Turkish westernization dates back to the late Ottoman period. Through two centuries, western civilization and its values have become the Kaaba of the Turkish sultans, leaders, and rulers (Cem 2017), but for the most part, local Turkish society has never adopted this ideology. An intense reformation of social norms has not occurred based on the cultural and historical process.

Thus, these more recent social changes do not reflect the cultural roots of Turkish society. The implementation of social changes and the major philosophy behind it did not overlap well, so the attempts did not permeate into the entire society. On the other hand, the inadequate and incomplete understanding of western civilization and its ethical values exists in the consciousness of Turkish society. This understanding influences a great variety of factors such as public perceptions, the culture of consumption, social media usage, and even the academic environment. It also creates confusion and an unbalanced perspective on how to respond to the refugee issue. Turks remain in between a more tra93 ditional way of acting and western social standards. This dilemma causes social inhibition when dealing with the refugee issue and somehow increases discriminatory discourses against Syrian refugees, particularly on social media. When it comes to social media, Facebook has the power to build perceptions that empower insecure individuals to feel superior to others, which spreads narcissistic behaviour, especially amongst teenagers (Turgeon 2011). This perceptual power leads individuals to feel entitled as a judge. This perception, and questioning what is allowed to be said, all become perception management tools that spread propaganda. The ability to access these materials easily while increasing judgmental hate speech in the host society has been instrumental in turning Facebook users into enforcers of discourses. The criticism in the interaction below emphasises how accuracy of information can change depending on what and for whom it serves, and also shows the changeability of reality between the borders of perception.

Facebook usage patterns should be considered as forms of social actions within local Turkish society (Coleman 1986). Democracy practices, suppression of the media, political and socio-economic instability due to internal and external conflicts like military actions and terrorism, education policy, and other factors influence the interpretation of socio-political conflicts within Turkish society.

There exists a large number of factors that (in)directly influence discourse towards Syrian refugees in Facebook usage patterns. These factors must be considered with a few critical points:

The contextual frameworks of the locals’ discourses on Facebook provide for a better understanding of the mechanisms in social media discourses related to the refugees.